James and Oliver Phelps For Shakespeare Movie,Matt Lewis Pictures From Walk of Smiles 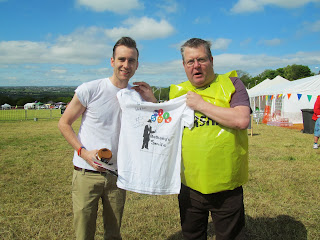 As we previously reported, Matthew Lewis attended the Walk of Smiles event in Leeds on Saturday. Yet, I am not totally sure he actually participated, rather he raised money by attending the finish line.
Today,  MatthewLewis.Com have posted images, one of which is left whereas the other are in our Cast album.

In other cast news, James and Oliver Phelps are being reported as to star in a new film adaption of Hamlet! According to Snitchseeker, their first proper Potter roles are to be that of  Guildenstern and Rosencratz in the Shakespeare tragedy. This is listed on their IMDB pages and no official announcement has been made as yet.
Posted by Admin, Niamh, Danaholics Anonymous at 8:53 PM