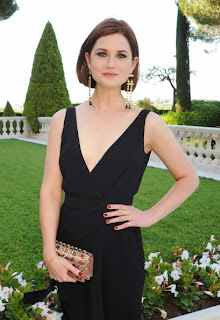 Mugglenet are reporting today that Bonnie Wright is to star in a Bollywood film; for charity:


Pooja decided to auction off roles in her upcoming films Bad and Cabaret, with the proceeds going to the charity The Scottish Circle, an affiliate of Oxfam. The Scottish Circle is using the money from the auction to help protect women from domestic violence.

This auction Bonnie has won! According to the post, "The lot that Bonnie won allows her to either take part in a spectacular song and dance number in Cabaret or have a speaking role in Bad."
Looking forward to that!


In other charity news, Matthew Lewis will take part in the Walk of Smiles tomorrow. It is a charity, fancy dress, 5k run which will take place in Rawdon, Leeds in aid of Bethany's Smile, a charity that raises money for chronically ill children. For more info head here.
Posted by Admin, Niamh, Danaholics Anonymous at 3:09 PM