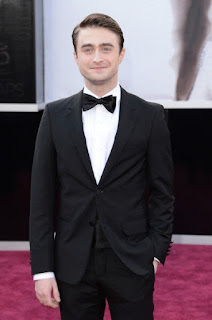 Daniel was out in force in the US award show scene the past few days, attending two ceremonies (including his first Oscars) and a few parties. Here is a ROUNDUP of the fansite coverage including the video of his singing and dancing you all want to see! Left is the picture that left me a bit hot and bothered last night. I swear i'm a recovering Danaholic and this gave me a bit of a relapse! My exact words (aloud while alone) were 'let me undo that bow-tie and get ta know ya'!!! lol.

Firstly, Daniel attended the Independent Spirit Awards the other night, presenting the award for Best International Film with Juno star Ellen Page. Pictures from this night (as well as from the Oscars) can be found in our latest Dan album.


A Video of Daniel presenting can be viewed below:

He also attended an Oscar pre-party this Friday, the Women in Film event to be exact. Personally, He looks kind of casual here for my liking but who am I to judge, eh?

The main, event, ie the Oscars happened last night in Hollywood and Daniel attended looking his best. He also opened the show with presented Seth MacFarlene and Joseph Gorden Levitt with, as we reported earlier, a feature on music in Hollywood, a video of which can be seen below:

Dan awarded the award for Best Production with (totes awkee momo) Kristen Stewart and this can also be seen below:

Helena Bonham Carter's participation in a musical number can also be seen at the link below.
Source: Snitchseeker

As always, if you missed the action and are living in Ireland you can catch it on RTE2 at 9pm tonight as I will be doing!

Pictures from all three events can be seen here.