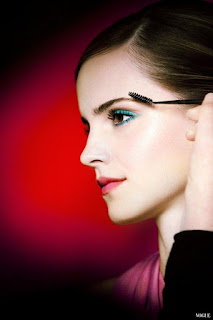 Emma has had alot of promo of late for Lancome's Spring-Summer line of makeup, which she is the face off. We have posted some of these images in our galleries. She has also since won Favourite Actress for her role in Perks of Being A Wallflower at the People's Choice Awards earlier this month.
But our key story today concerns her upcoming projects.
Mugglenet are reporting today that Emma Watson's next movie, The Bling Ring, which she completed after Perks, is to be released this coming June. She revealed this and a summer shoot commencement for Del Toro's Beauty and the Beast to MTV. A video is included, however, viewers outside of the US cannot view it. For those of you resident in America, check it out here.
A lancome advert preview can be seen below: 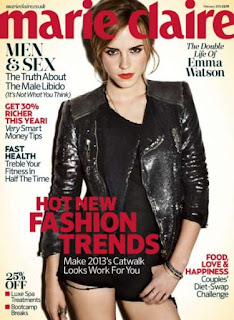 Update: Snitchseeker posted some excerpts from (pricey,lets be honest) Cosmopolitan and Marie Claire magazines for us regrading Emma and Lancome. Images can be seen left and in the gallery and some quotes are below:


Cosmoplitan: Who’s the most beautiful person you’ve ever met?

Emma: Emma Thompson springs to mind – she’s such a lovely woman. [Singer] Patti Smith is amazing – she seems really youthful but with the wisdom of someone who has been on the earth for a thousand years. And I really respect [director] Sofia Coppola and her artistic sensibilities.

Cosmo: What about beauty skills you just can’t get the hang of?

Emma: I’m a bit hopeless when it comes to my hair. I tend to just tie it back – it always looks a bit of a mess.

Cosmo: How would you describe your beauty style?

Emma: Clean and classic. I have quite a small face, so if I start putting on a lot of makeup it’s really noticeable. I’ve had people try to do big, dark smoky eyes on me and it just looks like I’ve been punched in the eye. So I stopped doing that.

On Hurricane Sandy in New York delaying the filming of Noah:

“At the time I was thinking, ‘This has a weird, dark irony,’” she mused as she recalled the delay to filming Noah. “I don’t think anyone was expecting it to be as impactful as it was. I was really lucky, I was in an area that wasn’t badly affected. But it’s amazing. We think we have so much control over our lives, and then something like that happens and people realise that there are things that are bigger than us, that are greater than us, that we don’t have control over. It was quite scary.”