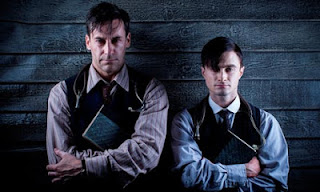 The Guardian have published an interview with Daniel Radcliffe about their upcoming show A Young Doctor's Notebook which will begin airing on SKY ARTS December 6th. Snippets from the interview can be found below (with the whole article available here) and the new image is left. The image is a larger version of one we already posted.


The conceit of the comedy is that Radcliffe plays the young doctor, while Hamm, 41, is his older self, who tutors him and plays to his deepest insecurities. Hamm's version "voices all the neuroses of the young doctor, he becomes the voice in his head", explained Radcliffe.

Radcliffe's character is straight out of a top Moscow medical school and assigned to a remote hospital, where he is the only doctor for miles. He is often on the edge of panic, inexperienced in the realities of medicine.

"He has learned his medicine in books; he is confronted with the reality," said Radcliffe. Or, as his character observes by episode two, being a doctor is a mix of "butcher and seamstress".

Acted with a degree of slapstick and gore, the adaptation includes a tooth extraction from hell, an eruption of pus like a water cannon from an infected eye, and that horrific leg amputation, with a blunt saw.

Radcliffe admitted: "The amputation was rough, you see me hacking away." He added: "I am an obsessive Bulgakov fan, since I read the book when I was 18. It is so compelling and exciting. This is his first book, and he can't help his own crazed imagination coming through. At the first meeting Jon and I had, I said, yes, let's do it."

As for the gore, Radcliffe said: "That had to stay. It is pretty graphic in the book, and you can't do justice to it without that. By episode four we were running out of blood."

He also had the challenge of sharing a bath with Hamm, as he tries to cope with the Russian winter. "You know you are the envy of every woman in the world," Radcliffe said, "but the bath soon turns cold." Hamm, he said, is "really funny, one of the best technical actors around".