Rupert has been continuing his Into the White promotion in Oslo and yesterday was the second screening of Into the White, this time a ticketed event that fans could attend!
Firstly, RG.NET have posted a link to the below video of Rupert answering fans questions through Zentropa Norway; 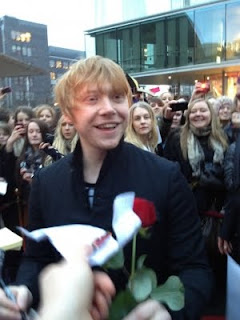 Anywho, back to the post at hand!
Again Rupert Grint US and RupertGrint.net have been busy bees and attended the second screening premiere. RupertGrint.US are still uploading their massive haul of World Premiere goodies including a new video and articles which can be seen here. In the meantime, our picture (left) comes from RupertGrint.Net's report on the second night which also included this video below;


They have loads of pictures (including the one above) sent in by fans attending which can be seen here.

RupertGrint.US also posted the eagerly-awaited (by us Rupert Lovers anyway) Visit Britain advert starring Rupert and on-screen mum (and employer in Driving Lessons) Julie Walters.
Check it out below; 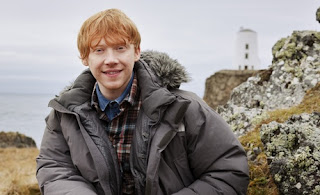 RG.US posted some details and an article which can be read here and comes with the great (very Ron) picture left.

"The promo was shot throughout the chilly February at various iconic places in Britain, and it was said to air from March 8 and two months ahead – but we have the pleasure of sharing the promo with you already!

The promo has been called an advertising campaign to boost tourism in Britain in the run-up to the Diamond Jubilee and the Olympics. Besides Rupert, the promo includes Stephen Fry, Julie Walters and Michelle Dockery. It is partly funded by £4 million from the Olympics budget, and its message is that “Holidays at Home are Great”."

I can vouch for Britain as a holiday destination being there several times...not all for Harry Potter outdoor sets (*ahem*).

Finally, they also posted a behind the scenes video, which is available below;