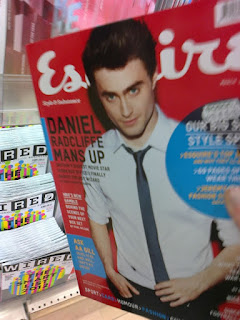 Dan will be all over our newsstands this month....and who's complaining!

Firstly, Snitchseeker had this interesting quote from the Chicago Sun Times below;

“But if I learned one thing in life, it’s that it’s foolish to cut yourself off from anything. My motto is to never say never.”

SS also had some dodgy Telegraph scans,but showing some nice pictures, All of which can be seen here. Will try and get some better ones!

Top Left is an image I took of the out now Esquire featuring Dan! Will try and get some scans tomorrow when I buy it! In the meantime, check out the article here. Link thanks to Woman in Black Uk!

Teen.com had this exclusive interview about Dan's fears which can be seen below;

Snitchseeker updated recently with articles on Dan's entries in Shortlist and Attitude magazine.
Firstly, They had this video from Shortlist, which can now be seen below;

They also had an image from Shortlist and the Attitude cover, which can now be seen here. I will have the Attitude scans etc asap!

Ellen is to host Dan tomorrow! Mugglenet are reporting this,but their site is blocked to me,so I'll find the details and get back to you!
Posted by Admin, Niamh, Danaholics Anonymous at 8:32 PM

Thanks for always keeping us updated. You are appreciated!

thanks so much deandrasf8! i appreciate the page views!