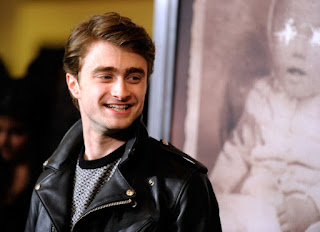 Dan Radcliffe recently attended the Los Angeles premiere of the Woman in Black and Snitchseeker picked up on a few photos of the man,also finding some pictures of Tom Felton at the event,who is in LA for upcoming convention attendances. Unfortunately, there is none of them together, so left we used a nice one of D looking all Danny from Grease, while more can be found here.

In other Woman in Black news, CBS released a new clip, this time of the opening scene! Want as preview (if you're in the UK or Ireland like me!) check it out right here, below, courtesy of Snitchseeker. Dan introduces the clip


Finally, Dan appeared on the Wendy Williams show and Extra when on promo, the videos of which can be seen below, from Snitchseeker and Magical Menagerie respectively;