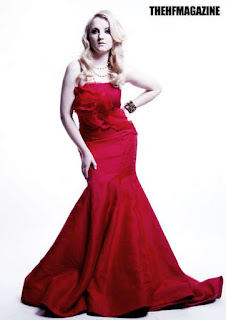 Being a particular idol of mine, and such a lovely lady every time i've met her, I'm always happy when Evanna interviews pass across our desk.
Snitchseeker were first with this lovely photoshoot (one picture left) and interview with the natural redhead from The HF magazine. They also posted some quotes from the sitdown,which in its entirety can be read here.
Here is one of my favourites;

"Can you name an actor that you would love to work with?
I’d love to work with Kirsten Dunst. She is so talented. I’ve admired her for years. You think she’s this fun, light-hearted blonde at first but underneath that she can portray such profound sadness and pain and damage. You can tell she’s had her ups and downs and she’s not afraid to pour all that into her work. I also really admire Joseph Gordon-Levitt. He’s brilliant in everything. And I read an article about him recently that mentioned a production company he runs that gets people to collaborate on projects via the Internet. I was so impressed by that because he’s breaking down the idea that the film industry, Hollywood, all that gab, is impenetrable. People have this false idea that it’s composed of an elite group of powerful people, when really it’s all just about creative people working their [bums] off.

In other news, Magical Menagerie posted this video first; a new behind the scenes clip regarding Harry's return to Hogwarts, which can now be seen at the link above. I also found it a Mugglenet's youtube below;

Finally, Mugglenet posted this interesting story regarding fan favourite characters from the books who never made it cross the scene, such as Winky, Ludo Bagman and Peeves (who i second!robbed of the Potters gone Potty and Voldy's gone Mouldy songs!). The full list can be read here.
Posted by Admin, Niamh, Danaholics Anonymous at 9:41 PM