RADCLIFFE FEST! DAN SINGS IN THE RAIN FOR MACYS,NEW WOMAN IN BLACK TRAILER,AND TALKS PAST YEAR AT DH LUCHEON

Plenty of Dan news today for you Dan lovers! Although the first story was published sometime last night; The new AMC Theatres Exlusive WOMAN IN BLACK trailer. @WomanNBlack posted it yesterday (although DR.CO.UK put it on twitter first) and it can be now viewed below; 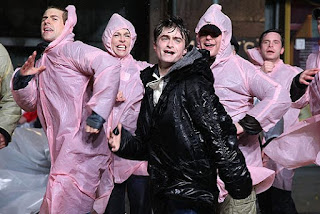 In other Dan news, Magical Menagerie were the first on the story regarding a THE SUN article that included pictures of Dan and his How To Succeed costars preparing for Macy's annual Thanksgiving Parade which occurs tomorrow. Left is just one of him "singing and dancing,in the rain!"

Finally Snitchseeker posted the story that Dan spoke about the past (first) year away from Potter (*sob*),future projects etc while attending a luncheon organised around the Blu-Ray release of Deathly Hallows Part 2. (Can't wait til fri week when we in Ireland get it!).
Here are some quotes;

"Radcliffe chimed in, “And 150 pounds heavier!” [Dan on Rupert in the original Epilogue]
Also interesting was their discussion about the relationship between the “fiercely intelligent,” according to Radcliffe, J.K. Rowling and the filmmakers.
An audience member asked about what the funniest moment on set was, and Radcliffe deadpanned, “What’s the funniest thing that’s happened to me in the past 10 years?”

One moment, though, that stood out to him was his “Henry V” speech to Dumbledore’s Army in Harry Potter and the Order of the Phoenix. He shared that he would wear shoes with blue covers on them so not to mark up the floor. During one take, while delivering the big rousing speech, Radcliffe looked down and realized he had put his shoes on the wrong feet. “Patton would not have done well if his shoes were on the wrong feet,” he laughed.
[Radcliffe] also got genuinely personal: “The day we finished [filming], I cried and cried,” Radcliffe said. “In that moment, when the thing you’ve been doing for 10 years ends; I just thought, ‘What am I going to do now?’ … I had a moment the other day where I was feeling very nostalgic for it.”

As Always,I'll remind you that you can get constant updates on Harry Potter cast news right on our twitter so follow!
Posted by Admin, Niamh, Danaholics Anonymous at 11:01 PM