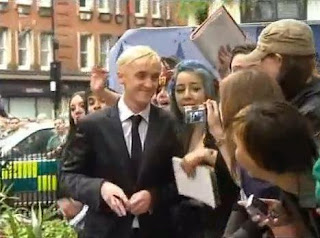 ITS ALL ABOUT TOM FELTON!
Tom Felton is to appear in his first tv show,according to Snitchseeker the other day. The Show is called Labyrinth and further info available here. It also stars Ollivander actor John Hurt.
In other Tom news, he attended RingCon in Germany recently and despite some difficulties with his airline, he enjoyed his time tweeting;

"Had a great time this weekend. Thanks for having me Germany and a huge thank you to everyone who came along to say hello. Thanks xx"

Snitchseeker had this video from a friend;


Finally you can now pre-order APES WILL RISE here as posted by snitchseeker.

The picture used in this post, is one of our own, taken with my friend Zineb.
Posted by Admin, Niamh, Danaholics Anonymous at 10:51 PM