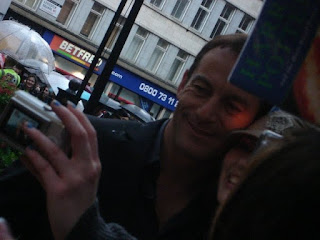 MAGICAL MENAGERIE announced last night that JASON ISAACS (Draco's dad in the series) "will be presenting at the ANWOL Annual Gala Event/Fundraiser on November 17th." For full details, head here. The actor is pictured left with our admin Niamh.
In other event news, Warwick Davis posted on his twitter that he will be at "@MCMExpo, London this weekend signing copies of my book 'Size Matters Not'&showing clips from 'Life's Too Short'"...fur further details follow him or just keep an eye on my twitter!

MAGICAL MENAGERIE also posted exclusives regarding the Cast and nominations/possible nominations and actual awards they received.The first five Harry Potter have made it into Seventeen's top 17 Halloween movies. It's odd cause i found the last 2 darker.
They also want us to vote for the Harry Potter cast for Portrait's TOP 30 UNDER 30. This can be done here, and full details can be found on MM's website.
Please note that the cast are miles behind!! Jared Padalecki looks set to win,and altho i love him,POTTER POWER!!
Posted by Admin, Niamh, Danaholics Anonymous at 10:18 PM