Daniel Radcliffe round-up: Young Americans Greenlighted, GTA: Gamechanger, Have I got News for You & More

News just in via email! After the signature numbers on the petition kept going up and up, Young Americans, which is set in 1970s and is to reunite Kill Your Darlings actors and director was greenlit!
Daniel Radcliffe and Dane De Haan have also now been joined by Kill Your Darlings DP Reed Morano and Amanda Seyfried. Check out the synopsis of the film, originally entitled College Republicans below:


The script is based on a true story from 1973 centred around Karl Rove. Rove, claimed to be played by DeHaan, runs a campaign for national College Republican Chairman. Under the guidance of his campaign manager Lee Atwater, supposedly Radcliffe, Rove’s campaign is far from clean.Their campaign includes a wild road trip intended to drum up support. Despite all the political machinations, however, the focus is really on the friendship between the two, and that’s something that Radcliffe and DeHaan could do a lot with." 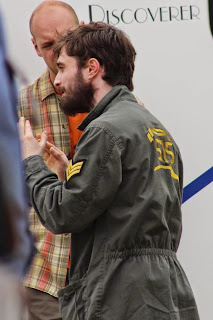 In other new projects, Dan Radcliffe has just begun work on Gamechanger, a film based around the non too straightforward origin story of the popular game Grand Theft Auto. The role was originally just a rumour as Dan was said to be in talks to play "Rockstar Games honcho Sam Hauser, who steered the games from their simple top-down origins to the massively complex - and violent - open world system we now know. " Bill Paxton was later confirmed and talk became more definite as regards Dan. He has no begun filming in South Africa (looking rather bearded!) and some candid set pics were revealed online, one of which is right, which credit to DR.CO.UK.

The word is that the film will be "broadcasting later this year via BBC television". The film is based on the book Jacked by David Kushner, which we just might give away as our next prize!
We'll keep you posted with developments!


In somewhat older project news, the first official look at Victor Frankenstein and Igor was released online a while back and this image can be seen here. There are also some fun photos of Dan with his Victor, James McAvoy, in the Jameson Film Awards photobooth here.

In videos, Dan posted a thank you to his Google+ to the LGBT Awards for his nomination  as Best Celebrity Straight Ally. Congrats Daniel!

Also in videos, Radcliffe recently returned to the presenting chair of the current affairs comedy show Have I Got News For You. The full episode can be watched below:


Finally, Daniel revealed, alongside other well known faces, what the first movie that made him cry was. You can check out the full video below, but look out for Dan at 0.08 and 4:02: