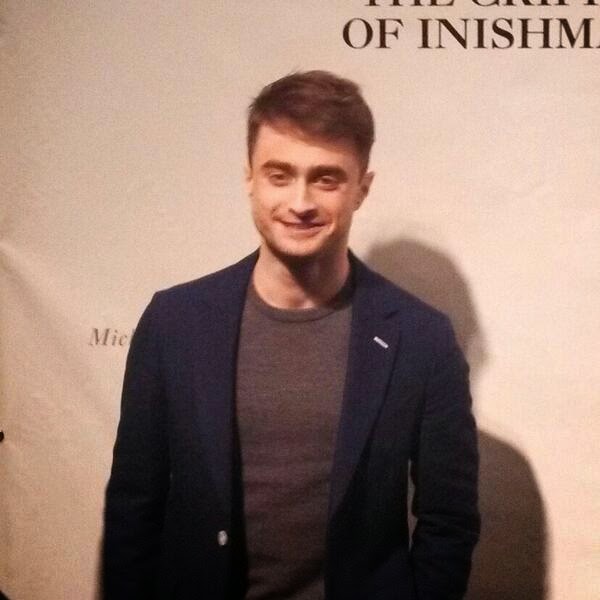 As you guys are probably well aware of, Cripple of Inishmaan had it's official opening night recently and lots of pictures and interviews have emerged in connection with this. One of the many press images is left and the rest will be in the album shortly!

For starters, here's a taste of some of the feedback the show's been getting:
Indianapolis Business Journal Review

There's also been interviews with NPR, Theatreworld and Vulture. Below is a snippit from Dan's short part in the Vulture piece on actor's dressing rooms at the Cort Theatre:

What’s here: “I have a pillow my mom’s friend had made which has GOOD LUCK DAN in Gaelic and the island of Inishmaan on it. Plus Ricola, Listerine, and foam massage rollers. On How to Succeed, I learned when you’re doing a show eight times a week you’ve got to take care of your body.”
Plus some gifts: “My character talks quite a bit about cows—there’s a running joke—so I’ll probably end up with a lot of stuffed cows and bells. When I did Equus, I got horses, which I don’t understand because my character had a pretty weird relationship with horses. And the artwork you get at stage door is sometimes amazing and sometimes scary. People draw my eyes massive—sometimes I think, Jesus Christ, I look like anime.”

Below is TheatreWorld's video interview:


In other interviews with the cast, Buzzfeed asked them about bad audition stories. Read the article here or look at Dan's snippit below:
“I had a really embarrassing meeting once, actually it’s really embarrassing and I’m not going to tell you what happened, but I’ll tell you a different story. I was in an audition and I was, not exactly bitching about somebody, but I was gossiping about somebody, and someone came into the room as I was halfway through the story and I was like, I can’t pull out now, I can’t just stop telling the story that would be a coward’s way out, so I took a chance and I was continuing telling it. I got to the end and I was looking at him [the guy who walked in], and I was like, ‘The person I’m talking about is a very good friend of yours, isn’t he?’ And he said, ‘Yeah.’ And then I had to do an audition with him.”