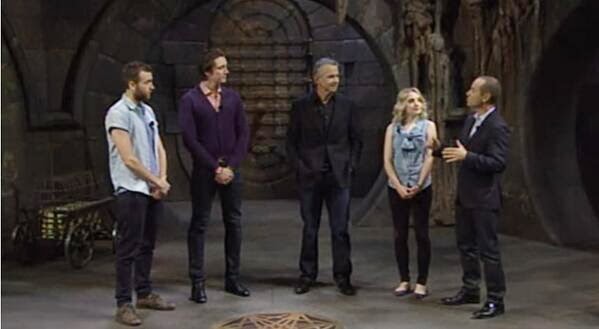 Many of the bigshots of the Potter fansite world are currently in Florida for the festivities surrounding the Celebration of Harry Potter convention being held this weekend from 24th to 26th January.

For full details of the list of events, head here.
Some of the big sites got a preview of Diagon Alley early yesterday and some descriptive content is below. Please note that Horizant Alley and Carkitt Market are "two new streets - named by J.K. Rowling herself - that run around the perimeter of Diagon Alley."

As guests enter through some sort of "representation of a moving wall" feature that will be located at the Leicester Square red building facade, they will step onto Diagon Alley. They then have the option of turning left onto Knockturn Alley, which is cloaked in darkness as it is completely covered, or turning right onto Carkitt Market. For those guests choosing to move straight ahead, however, and proceed down Diagon Alley, they will encounter Weasleys' Wizard Wheezes on their right and The Leaky Cauldron on their left. The Leaky Cauldron is quite large and takes up nearly half the block. Next to it is Madam Maulkins, then the Magical Menagerie and finally, Florean Fortescue's at the end of the block. Florean's is located on the corner of Diagon Alley and Horizont Alley. Across the street from it on Horizont Alley is Gringotts wizarding bank, and to the right of Gringotts (if you're standing on the street looking at it) is Wiseacres. We weren't able to tour Gringotts at all, but we were informed that the column where the fire-breathing dragon will sit is eventually going to be about twice as high as it currently is. 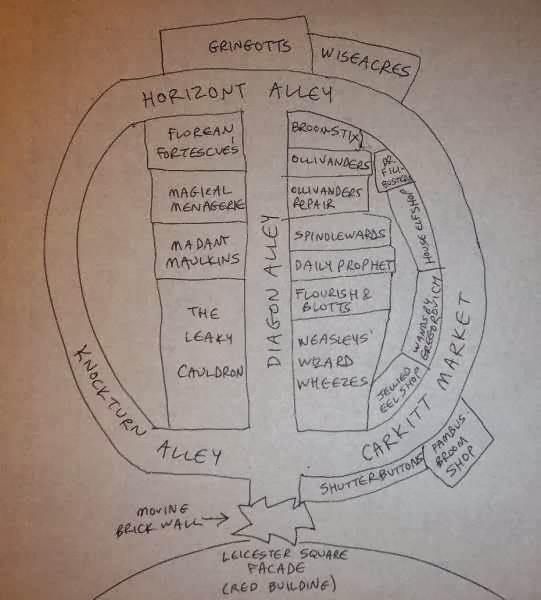 When guests turn around to walk back down Diagon Alley, they'll see Broomstix (facade), Ollivanders, Ollivanders Repair (facade), Spindlewards (facade), Daily Prophet (facade), Flourish & Blotts (looked like it might be a real shop; fingers crossed) and then they're back to Weasleys' Wizard Wheezes on the corner of Diagon Alley and Carkitt Market.

We were able to walk quite a ways down Carkitt Market, although there is a lot of shops we couldn't see as there is still much construction going on. In fact, everything we did see there seemed to be facades. On the left was Jellied Eel Shop, wands by Gregoriovich, House Elf shop, and Dr. Filibusters Fireworks. on the right what Shutterbuttons Photo Studio and Fambus Station Wagon broom shop, which showed an image of an extended broom that could fit an entire family (similar to a bicycle built for two - or rather, for four). There was a rather large building to the right of Fambus. No word on what it will house, but it's definitely not a facade building.

There was a drawing on a wall directing guests to the Fountain of Fair Fortune and the Hopping Pot. There are train trestles that run directly over The Leaky Cauldron, parallel to Carkitt Market. This is because there was a scene in Prisoner of Azkaban where Harry watched a train pass by his room at The Leaky Cauldron inn. While no trains will run on these tracks, there will be many sensory details (perhaps guests will hear or feel them).

There is no sense of technology anywhere in Diagon Alley. Guests will get the feeling that everything is either manual, gas-powered, machines, mechanical devices or magic. There will be no sight or sound of the outside muggle world. Also, all the structures quite high and are built to scale, except for Kings Cross station. We weren't able to tour that section of the park, nor Knockturn Alley, but we were told that Borgin and Burkes is the largest shop on Knockturn Alley. The size of the Diagon Alley park is about the same as the Hogsmeade park, not including the London facades and park.

The park, located in between the Thames River and the London building facades - will include a parked Knight Bus. Guests cannot enter the bus, but it will feature some sort of interaction (perhaps talking shrunken heads). There will also be a replica of famous Eros Fountain from Picadilly Square located in the park. Starting from left to right, the facade buildings are the Charing Cross Road bookshop (note: in the Potter books, the muggle side of The Leaky Cauldron is on Charing Cross Road), Leceister Square, the Wyndham Theatre and Grimmauld Place. The Wyndham is the most complex of all the facades, and eventually will include graphics and signage.

There is a webcast of the big reveal below:
Some screencaps are here.
Posted by Admin, Niamh, Danaholics Anonymous at 12:37 AM