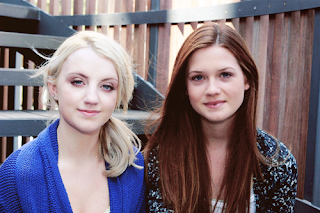 Both Evanna Lynch's G.B.F. and Bonnie Wright's short film (also starring David Thewlis) Separate we Come, Separate We Go will be available online next week. Bonnie Wright's directorial debut is already online at Vimeo and can be viewed below. Evanna Lynch's film will be available in the U.S. to DirecTv subscribers next Thursday the 21st and will be in U.S. cinemas and video on demand from January 17th next. Links and more details will be posted on this site as they emerge.

SEPARATE WE COME, SEPARATE WE GO from BonBonLumiere on Vimeo.
Posted by Admin, Niamh, Danaholics Anonymous at 2:46 PM