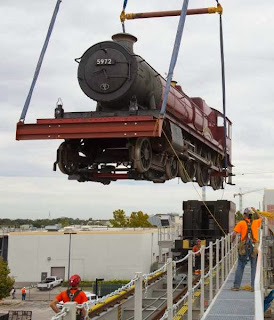 The Hogwarts Express has rolled into The Wizarding World of Harry Potter Orlando! The attraction, as part of the new diagon alley section to open next Summer can be seen left.
A video can be seen here.

In other news, Snitchseeker are reporting that there will be no rush on the Fantastic Beasts and Where to Find Them script and now deadline has been set for J.K. Rowling.
The Warner Bros exec, Greg Silverman, who admitted the situation said:

"Every writer at Warner Bros. has a deadline, unless you’ve been involved in a multibillion-dollar franchise."

In other Rowling-related warner bros ventures post-Potter, Pottermore at Playstation Home have added Halloween-themed stuff to their experience "including a decorated Great Hall, and being able to costume-up as one of Voldemort's Death Eaters."

In other Potter news, a limited edition stamp collection will be unveiled on November 19th in Orlando, according to Snitchseeker. Watch this space!
Posted by Admin, Niamh, Danaholics Anonymous at 10:48 PM