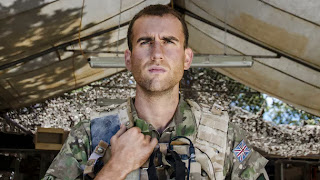 We reported a while back that Matthew Lewis teased us about a new project to be filmed in South Africa for the BBC. Nothing major was revealed, until now! He is to star in BBC3's  comedy drama Bluestone 43:

Matthew Lewis, best known for his role as Neville Longbottom in the Harry Potter films, has joined the cast of Bluestone 42, the critically-acclaimed BBC Three comedy drama which follows a fictional bomb disposal detachment in Afghanistan.

Matthew has just confirmed that he is to star in the Christmas special of the show. No word yet on whether he will continue his role into the next season.

@SnitchSeeker I will be in the Xmas special…
— Matthew Lewis (@Mattdavelewis) October 28, 2013

In other news, MatthewLewis.com are offering the chance to win a copy of The Sweet Shop for 48 hours through a rental from vimeo on demand. Retweet the below tweet and follow them here. The info on renting the film yourself is here.