We previously reported that Daniel Radcliffe had appeared on Comedy Central's The Colbert Report and the video is now available. It appears along with some other promotional stuff Dan has been doing in America for his film Kill Your Darlings. You can now view Dan's appearance on the comedy news show HERE, although please note it will not play outside of the USA.

Also, Live With David and Kelly: 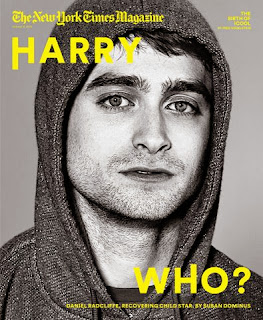 In other Dan promo, he has been profiled in the New York Times recently while attending Venice Film Festival. His covershot is left while some quotes are below:

At times in his professional life, Radcliffe said, he has felt self-conscious about other idiosyncrasies of his face, particularly when he was acting in his first post-Potter movie, a horror film called the “The Woman in Black.” During filming, he said, “I was struggling in vain to not come close to making a face that would make people think of Harry.” And how would he characterize a Harry face? “There isn’t,” he said, exhaling smoke and shaking his head. “It’s just my face. I have to accept the fact that my face is going to remind people of Harry because I played that character. If I try to avoid being expressive in that same way, all I’ll do is stop being expressive, and I won’t be any farther away from that character.”

The range of roles reflects Radcliffe’s ambition and his desire to prove, as quickly as he can, that he can genuinely act. “I have a massive chip on my shoulder,” he told me. “When you fall into something at age 11 and get paid incredible amounts of money for your entire teenage years for doing a job anyone would want, there is a part of you that thinks everybody is just saying, ‘He got there because he fell into it; he’s not really an actor.’ ” The possibility that those people might be right plagued him as well. “I feel it less nowadays,” he said. “It has taken a long time to feel like I’ve earned the place that I’m at.”

Yesterday we posted a pic and gallery link on our Facebook of Dan (also promoting KYD) attending an Academy screening of the film. More pics will be in the gallery soon!

Finally, the twitter for the aforementioned film has been posting some little reviews from general public who have been seeing the film. Check out some below:


Just saw #KillYourDarlings at #LFF. Ginsberg! Burroughs! Kerouac! Ahhh, the only people for me are the mad ones. - @danhiggins_

Kill Your Darlings - an entertaining debut with real spurts of energy & style. Radcliffe and DeHaan are brill. #LFF - @DavidBrake90

Second viewing confirms it, Kill Your Darlings is thrilling, one of the best films of the year. - @MaxRenn