NEW Role For Bonnie Wright in Those Who Wander, Domhnall Gleeson Attends 'About Time' Premiere 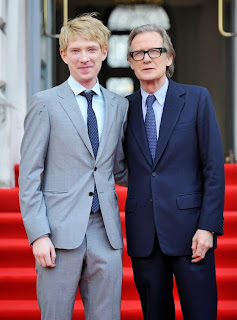 Domhnall Gleeson, best known to us as Bill Weasley attended the film premiere of About Time recently, a film about Love and time travel which co-stars fellow Potter alumni Bill Nighy (Scrimegeor) and Rachel McAdams. Not quite Doctor Who (which he was tipped for but obvs didn't get, a la sigh) but this looks set to boost Domhnall's career, possibly into Hollywood proper. Check out the image, posted by Snitchseeker, left. For more info on the film, check out the imdb page.

In casting news, Bonnie Wright is set to play an American 19 year old college student called Zoe in upcoming indie comedy holiday flick Those Who Wander. Some pictures of the star, who just started shooting the film on Thursday in Connecticut, with the filmmakers, Abigail Schwarz and Nicola Scandiffio can be found in our cast gallery.
The synopsis is as follows:

Frustrated with midterms, the city, and her increasingly complicated love life, 19-year old Zoe sets off on a road trip down to her unpredictable and ill-advised best friend Sam’s childhood home in Georgia, with Sam’s judgmental older roommate Spencer, Zoe’s it’s-really-complicated-so-let’s-just-say-friends-with-benefits lover Joel, and a guy named Danny who correlates his mood to his socks.
Somewhere south of the Mason-Dixon line it quickly becomes evident that the ‘fun spring break week to relax and forget’ is never going to happen, because: Sam has some seriously unresolved issues with his temperamental stepfather, Spencer seems determined not to let Zoe have any fun and Joel’s mixed signals are driving everyone insane. Not to mention Sam’s narcissistic childhood best friend Trey, who’s made it his mission to stir up some trouble and come between Zoe and Sam.
Caught up in a whirlwind of midnight car sex, day-raves in parking garages and drug dealers named Tiger, Zoe and Sam will do anything to keep pretending nothings wrong.