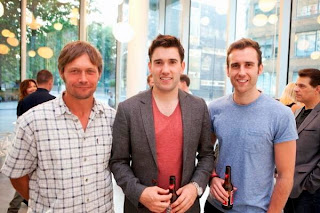 Totally Lit, an actor's workshop for 11-18 year olds launched recently and Matthew Lewis was in attendance. The programme includes Saturday classes in London for aspiring actors which are hosted by "leading industry professionals" according to the ad. Some images of the star can be seen in our galleries and another, with his brother Anthony and ex-Corrie actor Bill Ward, is left. No word on whether Matt will be one of the participants in this project as part of the "Masterclasses with top casting directors, actors and agents", but since one of the creative team is his brother Anthony, I'm guessing yes!

UPDATED:
We've received word from Totally lit that Matthew will indeed be hosting a masterclass, so if you're an aspiring actor between the ages of 11 and 18 living in or near London, make sure to book your audition soon! Below is the statement from Mr Paul David-Gough, an artistic director of the programme:


Matthew is the one of the first actors to sign up to our masterclass programme. Just so you are clear, as I don't wish to mislead people, the masterclass is only for students at Totally-lit. We are recruiting in the first two weeks of September (7th and 14th). People wishing to audition will need to book in, in advance, but they can do this via the website. Anyone under 16 needs an adult (parent/carer) to book on their behalf.

In other Matthew news, he and his first post-Potter project, The Sweet Shop are nominated for LFF awards. The London Film Festival is to take place between the 12th and 18th of October (no screening info as of yet) and the nominations relating to the film are as follows:
UPDATED:
As we mentioned in this original post above, Matthew Lewis' first post-Potter film, The Sweet Shop is to premiere at the London Film Festival and screening info has now been revealed by MatthewLewis.com:

the movie will be shown on October 17that 6pm. You can purchase tickets to the festival via the London IFF website. A daily pass for October 17th will cost £10 and you can attend any of the screenings on that date.