Snitchseeker have revealed that a brand new, full length, trailer for Dan Radcliffe's Kill Your Darlings has been released. You can see the trailer below, but please note, as with the film, there are MATURE THEMES:

The crime thriller about young pioneers of the beatnik generation during their time at Columbia University, will premiere at Venice this Sunday which Dan will attend after he finishes The Cripple of Inishmaan only tomorrow.
Some screencaps can be found in our gallery. 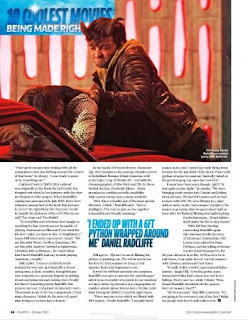 In other Dan news, he spoke to Total Film about the supernatural in Horns:

“Horns is a completely different performance from anything I’ve done before,” the 24-year-old told the new issue of Total Film magazine. "He’s a great character. It’s nice to play a real sort of anti-hero who does a few genuinely nasty things to people.”

“I actually loved snakes in the end. I ended up really liking them because for the last third of the movie I have a six foot python wrapped around me, basically, which is the greatest prop any actor has ever had.”

Radcliffe described the film as “so mad” and warned: “It’s not going to be everyone’s cup of tea but I think the people who love it will really love it.”

Scans in the gallery.

Finally, the director of Dan's next project, Tokyo Vice, Anthony Mandler has been speaking about preparation for the shoot:


"It's called 'Tokyo Vice.' It's written by Jake Adelstein," Mandler said. "It takes place in Tokyo. It's about an American that becomes a reporter at the Tokyo Times, and he breaks an incredible story about the Yakuza and about the reality of what it means to do that in regards to his safety and his life and whether it's actually worth it to bring the world that truth. It's very much like a '70s kind of thriller. So far it's been incredible. We're writing the script now. We're looking to start next year."

"I think [Dan]'s absolutely ready to go to the next level," Mandler said. "We sat down a couple of times and had some incredible meetings. His take on the work and on the book is right in line with mine, and I think it's all about the next phase after Mr. Potter."