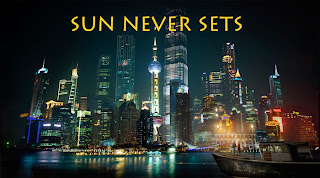 We reported on the first 'Coming Soon' trailer for Cho Chang actress Katie Leung's upcoming show Run and now there is an air date. On a trailer currently airing on UK and Irish tv, it announced the four part series begins next Monday, 15th July. Stay tuned for a review.

UPDATE:
The episodes will air for four Mondays at 10pm a new trailer has revealed!

In other Katie news, Magical Menagerie are reporting that she is to star in a short film, IF the team get enough donations to film through Kickstarter,  a website that helps people raise money to fuel their creative projects. The film, entitled Sun Never Sets is summarised as follows:


Sun Never Sets is set in the near future where China has become the undisputed world power and the West is in disarray. Now, the tired and hungry people of Europe are fleeing to the great cities of China to seek a new life as economic migrants. Against this backdrop, a Chinese-born Englishman named HEDGES has decided to turn his back on the tide of history by taking his adopted daughter KATIE to a small abandoned island downstream from Shanghai, where his British ancestors used to trade to China from in the nineteenth century.
He has rebooted the abandoned island and staffed it with illegal English immigrants to China, creating his own world as if the British Empire had never fallen. The island is off the grid and has no electricity or running water. The small community living under Hedges use gas lamps, so it’s as if they are living a British version of an Amish village. One day a wealthy English family, who have started a successful new life in Shanghai, crash their boat on the shores of the island. Hedges and Katie are forced to take them into their community. The arrival of the family sparks off something in Katie – who has always wondered what life might be like away from the island. She spends her evenings gazing at the neon haze of Shanghai, which she can see through her grimy bedroom window. Katie can see how at ease the family are with life in Shanghai; they speak fluent Mandarin and are fully accepted into Chinese society, and this leads her to question everything Hedges has told her about the modern world. This brings her into conflict with Hedges, especially when the young son of the family, TOM, offers to take her back to Shanghai with them. In the climax of the film, Katie is pressured to make life-changing choices, which ultimately reveal the dark history of the British Empire in China and Hedges’s ancestors involvement in the Opium Wars.


DONATE HERE!
Posted by Admin, Niamh, Danaholics Anonymous at 12:17 AM