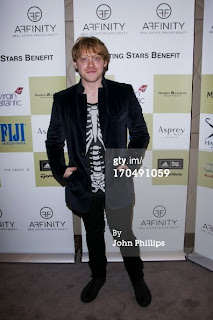 Rupert Grint US reported earlier that Rupert Grint was to attend in a charity dinner and golf tournament in aid of Shooting Stars. Yesterday he attended the Pairing Dinner at which he was paired with Samuel L. Jackson. Left is an image of him from the night, whereas more can be found in the gallery. The golf tournament will be held today so stay tuned for more!
Source: RupertGrint.Net


In other news, Magnolia Pictures are reporting: "Into The White will be available on DVD & Blu-ray June 25th! Be sure to pre-order your copy now: DVD, Blu-Ray.

Finally, Rupert Grint US are please to report a US release of The Necessary Death of Charlie Countryman , possibly as early as later this year: