Bonnie Wright starred in Shakespeare's Daughter quite some time ago, but now we have a clip from the movie. Snitchseeker had the news first, but their site is down so the video below was sourced at Mugglenet. The film has been renamed Before I Sleep and is about a young man named Eugene Devlin who used to be a famous poet but now searches for peace.It will release June 20th in the U.S. only. 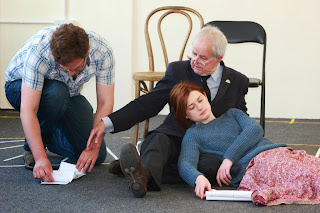 In other Bonnie news, the first shots of the actress rehearsing for The Moment of Truth. The Play, which is destined for the West End later this month and we reported on here, is sumarrised as follows:


A republic is poised to fall. The only remaining members of an unpopular government are its cynical Prime Minister and a naive, emotional Foreign Secretary. The invading army has its boots upon the soil of this crumbling nation. Inside the cabinet office, toy soldiers and old icons of military glory veil the realities of war and bloodshed. Death, in a moment of truth was never so real.

One image of Bonnie rehearsing can be seen left while more can be found in our gallery.
Source: Mugglenet

Finally, as we previously reported, Bonnie's turn in The Sea will premiere at the Edinburgh Film Festival on June 23rd. Commenting on the film, the author of the original book John Banville said:


What particularly pleases me about Stephen Brown‘s film version of the book is that it, too, is a work of art. It is also an intricate and beautifully crafted piece of cinema. I can say this without immodesty. At the start of a film project the script is the most vital component, but then the director, the actors, the cinematographer and the editor work their magic on it and bring about a transfiguration.

It is unknown if Bonnie will attend the premiere, however due to The Moment of Truth it is unlikely. For a full list of attendees so far announced go here.