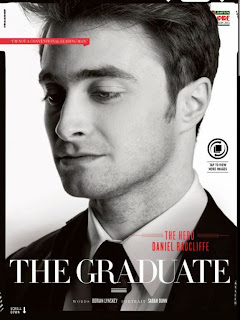 DanRadcliffe.co.uk are reporting that Daniel did a nice little interview with thew ever awesome Empire Magazine about his upcoming play The Cripple of Inishmaan (12 days!!!!), Frankenstein and of course the three completed films yet to be released (Kill Your Darlings, Horns and The F Word). The scans can be viewed in our gallery.


In other interviews, Daniel also spoke to Time Out magazine about Potter, Star Wars and of course Inishmaan. Below are just a few snippits expunged by Snitchseeker:


Radcliffe hinted that he would consider a role as the wizard’s dad in the “unlikely” event that JK Rowling writes a sequel: “No more schoolboy stuff. A cameo as Harry’s dad? That would be perfect!”

“I definitely want to have kids,” he said in an interview with Time Out magazine. “I’ve grown up around lots of people who were having kids when I knew them, because a lot of them were a lot older than me. And I saw the wonderful change in them.

“I see that it gives you a sense of purpose that up till now I only really get from work. I want that. I don’t know when or [with whom] but I want it. And I’d like to get started on it before my thirties. I like the idea of being a youngish parent. So I’ve got energy to play football even though they’ll be better than me by the time they’re four.”

In the play, Billy is slapped around by one of his aunts, played by Gillian Hanna, whom Radcliffe had to persuade to hit harder: “All of that getting beaten up stuff is brilliant. I encourage people to just hit me harder. The actress, Gillian Hanna – she’s not going to do permanent damage by smacking me in the head. She doesn’t like hitting people, understandably, but I’ve got her into it now, I think.”


Radcliffe added that he would love a role in a Star Wars film and that he is planning to get a tattoo: “It’s going to sound really pretentious but there’s a [Samuel] Beckett quote I really like which I’m going to get tattooed on me. ‘Try again, fail again, fail better.’ That’s what I’m about. I heard someone say growing up is about aiming to succeed but being fulfilled by failing very well. I agree with that 100 per cent."

UPDATED:
The full transcript can be read when the Time Out issue hits stands on June 4th or at their website here.