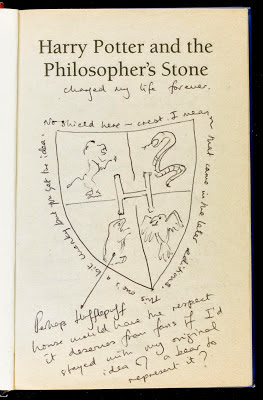 Rare or first copies of Philosopher Stone up until this point have been valuable, but in the last week a rare copy has exposed more that just the original printed version. Firstly it was revealed via an annonated copy (meaning it included notes in the margins by the author) , that the original animal and symbol of Hufflepuff was to be a bear:

“Perhaps Hufflepuff house would have the respect it deserves from the fans if I'd stayed with my original idea of a bear to represent it?”.

This same rare copy has just revealed a drawing of Snape. JK Rowling put the drawing on her website and the image can be seen here.

The former, according to Snitchseeker,  sold at auction for a startling 150,000 pounds ($228,000). It contained "43 pages of personal annotations by Rowling, about new 22 illustrations and 1100 words of original content" and two thirds of the money raised will go "towards English Pen, an organisation that promotes the "freedom to read and write," while the final third will go to Rowling's personal charity, the Lumos Foundation. Lumos was founded by Rowling and works to support the eight million children in institutions worldwide to regain their right to a family life and to end the institutionalisation of children."
An image of this is above, while more can be seen in our galleries!

In other Rowling news, she is still one of Forbes most powerful women, slipping 25 places from 73 to 98.
Posted by Admin, Niamh, Danaholics Anonymous at 8:58 PM