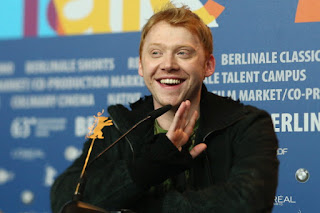 Rupert Grint attended the Berlin Film Festival recently taking part in a press event and the premiere of his latest film The Necessary Death of Charlie Countryman. A photo of Rupert at the festival can be seen on this post and more are in our gallery.

A video of Rupert speaking Romanian from rg.net's interview with the redhead can be viewed below:


In other Rupert news, it has been confirmed that Rupert is to star (as lead) in the pilot for Super Clyde, a CBS comedy show "from Raising Hope writer/EP Greg Garcia  [which] follows a meek fast food worker who decides to become a super hero."
FINGERS CROSSED IT GETS PICKED UP!
Posted by Admin, Niamh, Danaholics Anonymous at 12:14 PM