We previously told you we would be attending the Irish premiere (although it was just a screening) of Matthew Lewis' long-awaited movie break from Potter, Wasteland (which was renamed The Rise).
Here follows our review!

Luke Treadaway plays Harvey, a man framed for drug-dealing and just finished serving a year in prison for it. He plans revenge and a better life for him and his three friends in this smart drama-heist movie. The script is sharp and slick with intelligent dialogue (with just a hint of northern dialect) and Treadaway and Iwan Rheon (Dempsey) give powerful performances.

Matthew Lewis (Dodd) has a secondary role but grabs attention with comic relief and a strong portrayal of a grumpy 'hardman' who's a home-bird at heart. 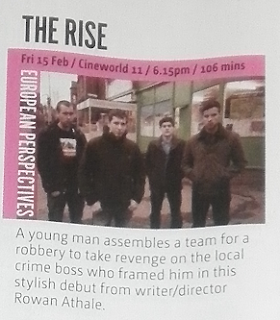 The film seems to take it's time getting to the 'heist' genre it claims but it does this with well played dramatic performances by the four leads and character building. The heist section of the film itself is fantastic and I found myself nervous.

Overall the film is well acted, with nice support from Potter alumni Timothy Spall. The film's initial slow pace is given some movement from the traditional heist screen swipe and accompanying music and is thrown into a crescendo with the film's twists. One wonders if the film's opening with the results of the heist is somewhat inspired by a previous visitor to this film festival, Cherrybomb.

Harvey says 'Let's F-ing Smash it' and they most definitely did.
Posted by Admin, Niamh, Danaholics Anonymous at 10:21 PM