Severus Snape Pottermore Preview, David Thewlis is Count and Another Premiere For Rupert's Next Project 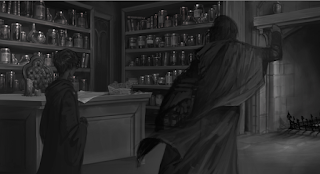 Pottermore, in honor of Snape's birthday, released the image left; an upcoming moment from Prisoner of Azkaban. They also held a Snape quiz.

In other random NEWS, David Thewlis (ie Lupin) is to star as Count Zurov in The Winter Queen , according to Mugglenet:


The Winter Queen is a tale of intrigue that takes place in nineteenth century Russia, based on the worldwide bestselling novel by Boris Akunin. It follows the story of detective Erast Fandorin as he tries to uncover the mystery behind a rash of suicides by young and wealthy men. In the process of his investigation, Fandorin discovers more than he bargained for. The character to be played by Thewlis, Count Zurov, is initially a suspect, but ends up being a friend to Fandorin.

Finally, Rupert's upcoming movie release The Necessary of Charlie Countryman is one step closer to general release. It is set to premiere at ANOTHER FESTIVAL, this time the Berlin International Film Festival to be held  between 7th - 17th February. While there, it will compete for The Gold Bear award.
Good luck,guys!
Source: Mugglenet
Posted by Admin, Niamh, Danaholics Anonymous at 6:37 PM