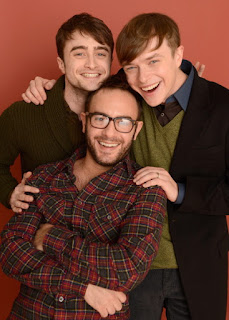 Last night, Kill Your Darlings premiered at the Sundance Film Festival which is held annually in Utah.
Prior to the screening, which was attended by Daniel Radcliffe and the principal cast, Dan and co did a photoshoot. One of these images( with Dane DeHaan and director John Krokidas) is left while the rest can be found in the Radcliffe gallery.

Since the premiere, reviews have been appearing online and Danradcliffe.com have been reporting on a few. The overall feel seems to be positive and here are just a few quotes (PLEASE NOTE THERE ARE A FEW PLOT SPOILERS IN THE FULL REVIEWS LINKED HERE) :

By building his portrait around a mysterious murder that tangentially involved the young Allen Ginsberg, Jack Kerouac and William Burroughs in 1944, John Krokidas’ Kill Your Darlings succeeds more than most in capturing the first flickers of the literary movement without hipster self-consciousness. -Hollywood Reporter

A mysterious Beat Generation footnote is fleshed out with skilled performances, darkly poetic visuals and a vivid rendering of 1940s academia in "Kill Your Darlings."

British thesp Radcliffe is every inch the bespectacled American nebbish one associates with Ginsberg. - Variety

Snitchseeker, who posted the aforementioned photos, also reported on a video of Dan et al speaking about the film before the premiere. This video can now be seen below:

Some images of Daniel at the premiere (the pants,people, wtf) can also be found in the gallery over on Facebook.

Entertainment Weekly also interviewed the cast and director, which can be viewed below:
Thanks to DR.COM for the link.

UPDATE: E! News have sat down with Dan to talk gay sex scenes in the film:

"It was something new," Radcliffe laughed at the Kill party at the Grey Goose Blue Door lounge. "But you know what, we shot that whole scene in maybe an hour and a half so it was incredibly fast-paced. I didn't really have time to stop to think and worry about it."

He added with a laugh, "John was very helpful in furnishing me with a lot of graphic detail of what I would be experiencing at the various stages."


They also spoke with his on-screen love interest, Dane Dehaan who spoke highly of Dan: