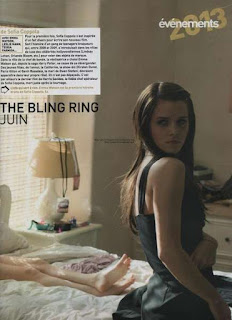 Some new promos of Emma Watson in The Bling Ring have emerged. Snitchseeker have posted these and one if left while the rest can be found in our Emma gallery. Word is that this film is slated for a June 2013 release!


Rupert Grint is also reported to have his recent two films slated for a 2013 release.
Much like Kill Your Darlings, the unusually titled The Necessary Death of Charlie Countryman is to premiere at the Sundance Film Festival next January. Rupert has a small part in the movie which chronicles the story of Charlie as he is taken with a woman mixed up with crime.
Source: Mugglenet

CBGB, which also stars Rupert in a small part, according to its star Ashley Greene, "is slated for theaters in 2013".
Posted by Admin, Niamh, Danaholics Anonymous at 4:44 PM

Rupert a small Part in CBGB? I thought everyone (except Ashley and Alan) will be supporting, since almost everyone just had 1-2 Weeks filming :O

Indeed, in the film world it would be considered supporting but by all means it will be an actual "small part of the film" that he is in.