NEW 'From the Rough' Image,Rupert in a dog collar?From the CBGB Producer! 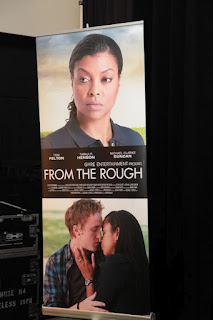 A Tom Felton fan on twitter posted a new picture from Tom's upcoming film recently. The facebook of the film posted the original,which came as a relief to fans as nothing has been heard in a good while. The picture depicts a poster from the movie and is now left.

In upcoming cast films, we previously reported on CBGB buzz and their twitter has been inondated with pictures from pre-production and crew interviews. Interestingly, a quote regarding Rupert Grint crossed my phone last week that caught my eye:

"We're excited to see Rupert in a dog collar."

The quote comes from the producer,Jody Savin, who gave an interview to Savannah Now which can be read here.
Posted by Admin, Niamh, Danaholics Anonymous at 10:05 PM