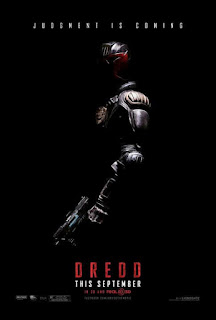 Magical Menagerie have revealed that our very own Domhnall Gleeson(by our i mean the Irish :P) will appear in the comic book movie,Dredd, based on the comic book Judge Dredd. The topic is a disenchanted American East Coast, overrun by criminals, and the film is to be released in September. MM say 21st,IMDB says 7th and Domhnall's part is unknown. Check out the poster left.

They also posted a new video to their facebook where Dan answers a fan question:
Will you continue to make horror films?
Watch here.

Dan recently gave an interview to Tapp Magazine in which he spoke of the nerves he still has auditioning,among other topics. DanRadcliffe.com caught the interview which can be read in full here, while a quote is below:

What are your strengths in an audition?

I’m really good with scripts. I can find a way into a script and break it down really well. I can find what my relationship to the material is very quickly, and that’s what I always love to talk to directors about.

Do you still get nervous?

Yes absolutely. I originally auditioned for Kill Your Darlings three years ago. I was playing Allen Ginsberg and had a meeting with the director John Krokidas. I was very, very nervous.