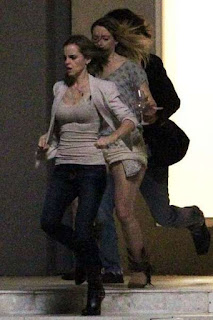 Emms has been tweeting excitedly the past few days about her various activities. Firstly we would like to mention that she has begun her cameo in the comedy apocolyptic film End of the World where she stars as herself in a celeb party that goes terribly wrong. She tweeted;

Comedy is brutal #endoftheworld. New Orleans is the best!! : ) See you all soon. Em x

Snitchseeker have now posted some on-set images of the british beauty,one of which shows her running away,can be seen left.Another of her with Set Rogen is in our galleries.

In other upcoming Emma, a small reminder that she is to attend the MTV Movie Awards this year and present the first Perks of Being A Wallflower trailer June 3rd.She has tweeted(on the 30th May):

I'm getting excited for the MTV movie awards now.4 sleeps to go.I think u r going to like the trailer.Found a great dress too.New designer:)

Potter and it's cast are up for numerous awards,so keep voting here. Also a new category, Best Hero, has emerged and you can vote for Harry by tweeting:

I #votepotter for the 2012 MTV #MovieAwards Best Hero! See who's in the lead and tweet your vote: http://at.mtv.com/dBe