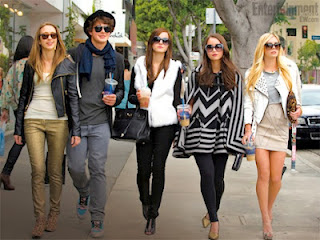 Mugglenet were the first to report today that Entertainment Weekly took some new quotes from Emma Watson about her upcoming film, The Bling Ring, in which she stars as a real-life celebrity burglar. Emma told EW she took inspiration from reality tv while preparing for the role:

''I just watched a ton of reality TV,'' she says. ''I was doing an English course [at Brown University]. So I would go from reading Virginia Woolf to [watching] Kim Kardashian. I kind of loved it, this mix of super-high and super-low culture. I think it was a nice balance.''

A new promotional image from the film to be released September 14th, was included in the article and is now top left.
Posted by Admin, Niamh, Danaholics Anonymous at 8:40 PM