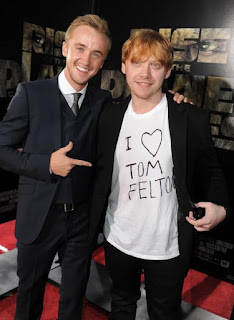 Rupert Grint. Net were first to confirm Rupert's involvement in a new project; in a biopic called The Drummer.

"Rupert Grint has signed on to star in The Drummer, a biopic about Beach Boys drummer Dennis Wilson. Rupert will play the part of Stan Shapiro, a mailroom intern who becomes close friends with Wilson."

Filming will begin June 15th this year in Calafornia.
Keep you posted!
Rupert Grint US have posted some quotes with the producer of the film etc which can be found here. ALSO a Hollywood.com article has a quote from the director here.

In other NEW PROJECTS, Tom Felton has been confirmed to star opposite Sharon Stone in a thriller called Attachment. IMDB summarizes the plot as follows;

"A married mother's fling with a younger man results in a scary stalker situation."

He is to play the stalker student Stone takes home one night. ComingSoon.com had the following information;

"The film, written by Christopher Denham, stars Stone as a married woman and teacher who shares a night of infidelity with one of her students. Afterward, the student begins to stalk her and her family as he dates her own teenage daughter.

Felton, best known for the “Harry Potter” series, will play the student antagonist and the plan is to begin production in the next couple of months."

He is also "signed a letter of intent" to appear in a World War take on Dracula.
Feltbeats broke the news that Tom is set to star in the film Fangs of War.

Tom is set to play Dr. John Seward, “a Freudian-schooled psychiatrist more experienced in theory than practice who’s itching to get out on the battle field.”

Finally, another part of Tom is to appear in a German movie; his voice. Feltbeats are reporting that If You Could Be Anywhere is to feature in a German movie entitled “Türkisch für Anfänger” (Turkish for Beginners),which was released 15th MARCH, the soundtrack debuting on the 16th. One tweeter reported that it appears in the background of a conversation.
Posted by Admin, Niamh, Danaholics Anonymous at 5:26 PM