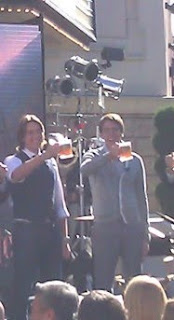 The main sites, ie Mugglenet,Leaky and Snitchseeker were all present in LA today for an official announcement by Universal. We all knew it was as regards the new Harry Potter theme park to be set up there. But it was also revealed that Orlando is expanding!
James and Oliver Phelps (left from snitchseeker) attended the announcement and helped toast with butterbeer. For full coverage check out Mugglenet's live blog here or just their roundup here. The gov makes some fun hp reference jokes.Snitchseeker also have a report on the brief event here.

Although information was vague, they said they will announce more soon. On that note this rumour from Mugglenet.
Although I misread this connecting story to say universal in London, its still cool if they are to recreate important parts of London such as Kings Cross and Diagon Alley!

As regards the twins, Oliver's jacket from his recent charity mountain climbing 'for Harry' is up for grabs! You can enter here and read more info here.

UPDATED 7TH DEC: Warner Bros have also released a video of the event, according to Mugglenet. It is now available below;