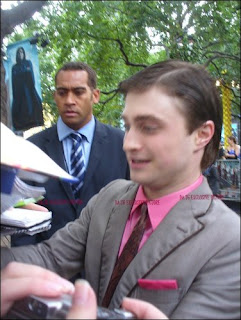 It was How To Succeed's official twitter's honour to announce earlier today that the music and its stars were up for Grammy Awards, a great honour! They posted a link to this playbill article.

Deathly Hallows Part 2 is also nominated "in the category of Best Score Soundtrack for Visual Media" according to Mugglenet.

Film have a nice little piece of Dan's own fears in conjunction with all this talk of fears regarding his upcoming chiller The Woman in Black. In their sitdown, Dan mentioned cockroaches and acting to a half empty room.

Dan also in a fan poll of fanciable Potter stars. SUPRISINGLY with only 6% of the vote ahead of Robbie Coltrane in 6th place! Well done to Rupert who got the top spot...it could be my ginger fetish talking but, i agree; very fanciable :P
Thanks to Matthew Lewis.com for the story!
On the note of Rupert, Snitchseeker have a lovely article about the experience of the series being over with comments from David Yates and Rupert, the latter of which is below;

"A reunion does sound good. This has been such a big part of all our lives, hopefully we'll all stay in touch. It's going to be weird when the last DVD comes out and when it slowly starts to fade and go quiet," he said.

"Then I'm going to realise that it really is over. It's kind of sad really."

"It becomes clear how long it's been and how much of our lives this has taken over. It's all good memories, I've loved every minute of it so it's very sad that it's over.

"For me, I'll always love the third one, and this one is such a great way to end I think, it's a really huge epic story that's got everything in it - love, death, it's really quite emotional."