UPDATED: Daniel Radcliffe appears on Saturday Night with Miriam, Talks about how "awesome" Dublin looks in What If 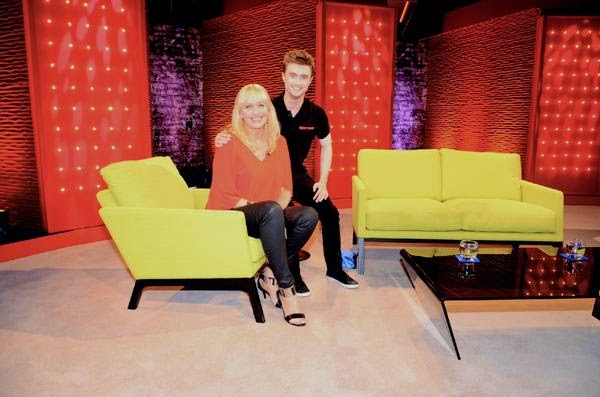 Daniel sat down with RTE legend Miriam O'Callaghan on her summer tv show Saturday Night With Miriam after the premiere on Friday and the interview was broadcast on RTE 1 last night. Irish viewers can now see the interview at RTE Player here, and I will be looking for an international video. Left is an image from the host's twitter account.

In other interviews, a preview of Dan's interview with RTE Ten is available online (published in full tmrw) and below are some quotes:

"Dublin looks awesome; it's not hard to make Dublin look really pretty but it looks great in the movie. It was a lovely ending to the whole shoot, we finished it off here so it was a nice way to go."

UPDATED:
Still no international video for the interview with Miriam, but I'll keep looking. On the show Dan spoke about:
some sections of British press making him out to be 'obnoxious,entitled and headed for failure'. He said Irish press were so lovely here, and it's true he probably doesn't get bothered much.
visiting County Clare while visiting an ex-girlfriends family (guessing Laura O'Toole) and finding it beautiful especially the Cliffs of Moher.
Not liking doing the Irish accent now after a few months off Broadway because he doesn't want to mess it up, learning Japanese and a southern drawl accent. This got us wondering, what role does he need a Southern accent? His character in Brooklyn Bridge is from Philadelphia and his character in Tokyo Vice is from Missouri. Rumours online say he may possibly be doing something for the College Republicans with Kill Your Darlings co-star Dane DeHaan.
about moving on from Potter and those old quotes about Half-Blood Prince springing up again.
about how Wallace is a hopeless romantic and about What If in general.
about how his comment on the Lib Dems and the British general election back in 2009 got thrown so out of proportion.

In other updates, the RTE Ten video is now up, though most likely only available to those in Ireland:
http://www.rte.ie/ten/video/2014/0817/637670-watch-daniel-radcliffe-chats-to-ten/">Watch! Daniel Radcliffe chats to TEN