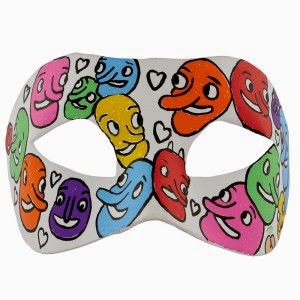 In other Rupert news,

Rupert has created a Venetian Mask for restaurant Daphne’s on behalf of their 50th anniversary. Other masks have been designed by Harry Styles, Dame Shirley Bassey, Lily Aldridge, Alice Temperley and many more. The masks will be on display at Daphne’s in July before being auctioned of to raise money for Great Ormond Street Hospital.

Check out the mask left.

A trailer has been released for Rupert's upcoming animation feature The Unbeatables. Check it out below.


In other animation news, Postman Pat is to have a limited released in the U.S.A. New York and Los Angeles were to start showing the film from yesterday with no news of a wider release. The Unbeatables will be released in the US on January 16th, 2015.