Dan is still working away on Broadway (with only two months to go!) and is still doing the interview rounds to promote Inishmaan.
He recently appeared on the Charlie Rose show and the video can be seen below:


In other Inishmaan news, former Potter director Chris Columbus visited Dan. The image of the pair can be seen here.
You can still get tickets to the special evening in aid of the Trevor Project, which includes a post-play talk with the cast, here.

Dan also spoke to NYCGo about the play, his fellow cast members and his favourite places in New York. Some quotes are below and the full interview is here:


What do you look forward to doing in New York each time you come back?

Daniel Radcliffe: The food here is wonderful—not that I'm particularly sophisticated by any stretch of the imagination. I live in the West Village, and I go to Ditch Plains all the time. I recently got really excited because I realized it was owned by Marc Murphy, one of the judges on Chopped. Commerce is also fantastic, and my friend just introduced me to The Grey Dog. I also love this place called Fat Cat because I enjoy playing Ping-Pong. The whole cast of the show and I went there not long ago, and it was awesome. The place I always used to go for dinner after shows—which I haven't actually been to this time yet—is Angus McIndoe [now called Angus' Café Bistro]. It's a very welcoming place. The guy who runs it is Scottish, so it's a little bit of Britain away from Britain.

What about New York is more enjoyable to you than London?
DR: I don't know if it's because in London we do sort of have gray weather the whole year round, but there is a genuine positivity to New York. London is quite a cynical city in some ways—it doesn't have quite the same energy about it that New York does. London is always going to be my home—it's where I was born and where I'm from—but I definitely enjoy spending time here.


What's one of your favorite things to do in New York?
DR: Running. Now I'll run up the West Side Highway, but when I was doing Equus, I was living on the Upper West Side and I would go to Central Park. I think that's one of the more fun experiences you can have, particularly if you're competitive like me, because there are always going to be enough people there to have a race—even if they don't know they're in a race. You can find other people to focus on and then run to. 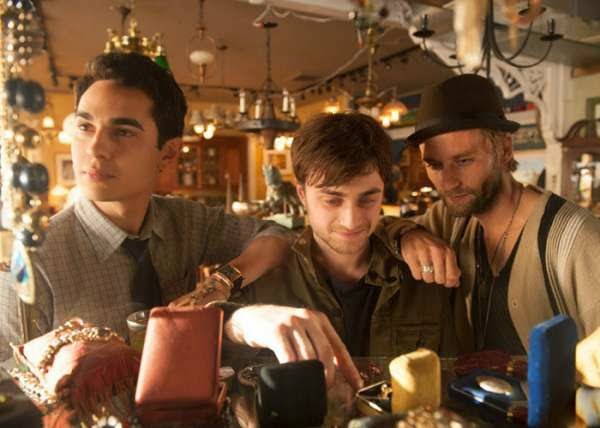 In new images, some new Horns promos have emerged online. One is left and the rest are in our gallery.

In other Dan news, he is to attend and present at the firstTrailblazers event this June in NYC:

Logo TV has announced it will hold and air its first “Trailblazers” event, which will honor the work of pioneers in the fight for LGBT rights.
The event will be held in New York City's Cathedral of St. John the Divine, one of the first churches to host gay marriages and air on Thursday, June 26 at 9 p.m.

Finally, a new fan biography is to be published later this year:

The Life and Career of Daniel Radcliffe, the first in the series of celebrity biographies, will look at Radcliffe's childhood, his career in film, television and theater and, also, his private life, which up until now, has remained a mystery. The biography will boldly explore such topics as Radcliffe's early problems with alcohol, his private health issues, and his much talked about sexuality and love life.