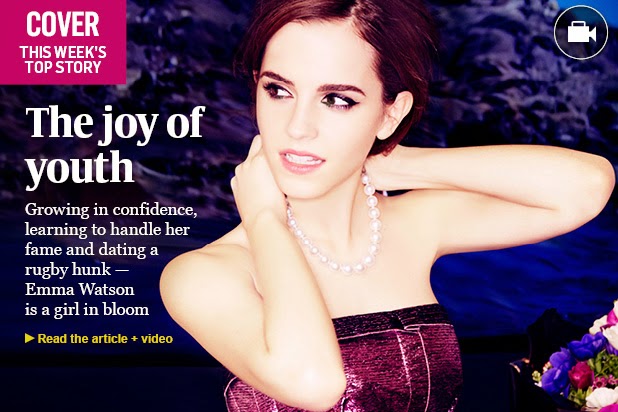 As time wears on, the news I have to catch-up on grows, so here is a short summary of  recent Emma news.
Emma has been going round the world promoting Noah and images from the Berlin, New York, Madrid and London premieres are in our gallery.

In other images, Emma did a photoshoot (left) for the Sunday Times last week and some images from that are in our gallery here and here.

In the interview she spoke about keeping her private life private:

Cooking helps me to relax, and I think people close to you appreciate a home-cooked meal,” she adds coyly, although it’s about as close as she’ll get to revealing anything about her newest relationship, with Matt Janney, rugby hunk and Oxford’s most eligible bachelor. “I can’t comment on it, I’m sorry,” she says, suddenly jumping up and hastily bundling her things back into her bag, which has exploded across the sofa beside her. “I’m trying to keep my private life sacred, although I don’t want to lock myself up and never go out. So I guard it, because I don’t date people who are famous, and I don’t think it’s fair that, all of a sudden, intimate details of their personal life are public as a direct result of me. I find that so uncomfortable, and I wish there was a way I could protect those people, but it’s not in my control.”

among other topics. The interview can be read here.

She also recently spoke to British Vogue about her connection to Fair Trade Fashion:


Emma Watson is among the growing lobby of celebrities galvanizing a generation of teenage girls to think twice about their Saturday shopping habits. "I've travelled to Bangladesh and visited factories like Rana Plaza," she says. "I knew how bad the conditions were before the collapse," she says. 'I think it's important that I'm accountable for the choices I make and understand they have serious consequences."

She spoke to Variety about Little Mermaid casting rumours:


After Deadline broke news last week that Sofia Coppola had signed to direct a live-action “The Little Mermaid,” media outlets started to speculate that Emma Watson (who appeared in Coppola’s “Bling Ring”) would be perfect casting as Ariel.

Well, it turns out, Watson already has the costume at home. But it’s an old costume. “I actually dressed up as Ariel for my fifth birthday,”... She hasn’t been offered the fin-flipping role yet. “I mean I’d have to read it first,” Watson said, adding, “I love Sofia so much.”

Finally Emma spoke to the New York Times about an innovative friend of hers, Petra Collins founder of Rookie Magazine:
Ms. Watson, though six years older than Ms. Gevinson, said she found the two had a lot in common when they met at the TED talks in 2012 and started chatting.
“She related to me in a way that most interviewers can’t,” Ms. Watson wrote in a recent email. “She is also incredibly honest. It’s difficult not to feel like you can trust someone like that. You feel vulnerable, but she is vulnerable too. She is also in this arena.”
Ms. Gevinson’s willingness to put herself in the spotlight sets an example for all women, regardless of their age, Ms. Watson said
Posted by Admin, Niamh, Danaholics Anonymous at 6:48 PM