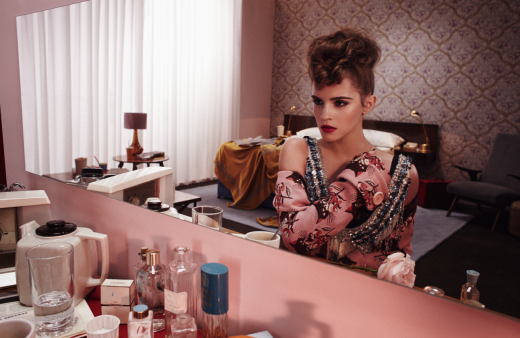 For what seems like an age now, we've been telling you about Emma Watson's guest editing gig at Wonderland magazine and the issue is now officially almost here! The issue, which also includes that controversial interview with J.K. Rowling (more on that later in the post), hits shelves tomorrow.
Yesterday the site of the magazine revealed the interview and some of this is below with the full article being accessible here. The photoshoot was also revealed and this can be seen left and in full in our special gallery.

D: You were in New York during Hurricane Sandy. How surreal was that?
E: It was surreal for a couple of reasons. It delayed the end of our shooting for a few weeks, so we got the irony of filming an epic biblical movie about a flood, and then a storm comes and floods much of New York. It even damaged the ark, which was what set us back. The other reason that it was surreal was because you and I were on the Upper East Side, which was completely unfazed by the storm. We had high speed Internet and our phones. All the shops were open and, even weirder, people were shopping in them. The Carlyle Hotel was packed with people getting drinks. I remember calling you and asking, ‘Isn’t there something we can do I feel like such a waste of space?’ And you took me on a meal delivery with Citymeals on Wheels. That was amazing that we could do that.

D: Speaking of Brown, I’m very proud that you are going to be an official Ivy League graduate soon.
E: Yes! I’m going to graduate in May, which I can’t believe. I can’t. I just can’t! Very exciting.

D: So, tell me: What do you plan on doing with that major?
E: Tough question… I’ve been very fulfilled by my studies. English has helped me think in an analytical way. It’s helped me see the world from new perspectives. Diving into these stories and characters has given richness to my own life. And now, when I read scripts or look at stories, I have these references for a larger understanding of humanity. I’m sure it will make my job as an actress more interesting.

D: I visited you on the Harry Potter set a few times, and it was like a little family and everyone knew each other.
E: It was. I miss the people too. I miss the familiarity.

D: But you’re not as puritanical as that, Emma.
E: I feel like I’ve been given a lot of credit where it isn’t due that I don’t like to party. The truth is that I’m genuinely a shy, socially awkward, introverted person. At a big party, I’m like Bambie in the headlights. It’s too much stimulation for me, which is why I end up going to the bathroom! I need time outs! You’ve seen me at parties, Derek. I get anxious. I’m terrible at small talk and I have a ridiculously short attention span.

In other Emma news, she is to star alongside Ethan Hawke in the drama thriller Regression with a release date somewhere in 2015.

In other February Wonderland interviews, Joanne Rowling caused a stire when some snippits from her interview were released to the following effect:

J.K. Rowling: “I wrote the Hermione/Ron relationship as a form of wish fulfillment,” she says. “That’s how it was conceived, really. For reasons that have very little to do with literature and far more to do with me clinging to the plot as I first imagined it, Hermione ended up with Ron.”

“I know, I’m sorry,” she continued, “I can hear the rage and fury it might cause some fans, but if I’m absolutely honest, distance has given me perspective on that. It was a choice I made for very personal reasons, not for reasons of credibility. Am I breaking people’s hearts by saying this? I hope not.”

I read this while out partying, very drunk, so it broke my heart a little. The thing that bugs me though, is that the paper that printed this quote previewing the interview linked this admission to Rowling intending that Hermione would be better with Harry and nowhere does it say in the quotes that this is the case. Apparantly it's one or the other and this is far from the truth. It's safe to say what side of the fence I'm on, how about you?
We'll have to wait and see the full quotes later this week!