Daniel Radcliffe to Guest Star on the Kumars, Promos and Video Preview 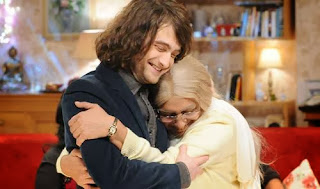 As we retweeted when the news broke on December 19th, Daniel Radcliffe will guest star on the new series of The Kumars on Sky One when it begins airing on December 15th. Since this news, promotional images (one is left and the rest in the album) and a video preview have emerged. Below is a synopsis of the episode which will star Dan alongside Chevy Chase and Olivia Colman:

After a seven year break the multi-award winning, much loved television family, THE KUMARS, are bounding back onto our TV screens with a new home and a new cast member. The new six part series will begin on Wednesday 15th January at 9pm on Sky 1 HD.

Following a downturn in fortunes, THE KUMARS are now living in a flat in Hounslow, behind the homewares and gift shop that Dad, Ashwin (Vincent Ibrahim), now runs. Sanjeev (Sanjeev Bhaskar) is divorced from his wife of nearly two years - she now lives in New York with their daughter, Angelina Jolie Kumar. Mum, Madhuri, has returned to India to look after ailing relatives and Ashwin has secured a sponsorship deal with BIMLA CORP, to resurrect the family’s talk show. Having also negotiated cheap rent in return for a regular appearance on the show, the family’s landlady - aspiring actress and hand model, Hawney (Harvey Virdi) - joins in with the questioning much to the dismay of Grandma, Ummi (Meera Syal).

The video preview is now below: