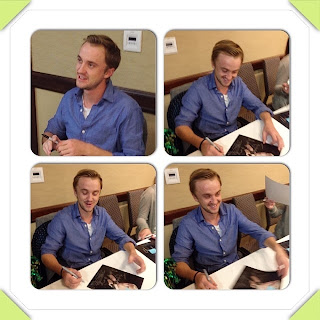 Tom Felton attended Boston's Super MegaFest the weekend before last and since then lots of images and a video have emerged. One image is left while more can be found at Feltbeats here and Mugglenet here.

There are videos of his panel appearance at the con at the bottom of this post.

Also from the con, news came from the man himself that he will attend the special Potter con at the Wizarding World of Harry Potter this coming January:

Have you been to the Harry Potter park at Universal in Orlando?

Tom Felton (17:30): Yeah, I have. In fact, just got exciting news a couple of days ago that hopefully I'm gonna go down there in January to help open the second stage because they're expanding the theme park considerably. I think they're building... Diagon Alley, so I'm looking forward to that.

We have posted about this event previously and this news feed can be read here.

Posted by Admin, Niamh, Danaholics Anonymous at 1:03 AM