MSN have revealed a brand new trailer for the upcoming Dec 6th UK release of Kill Your Darlings. This can now be viewed below: 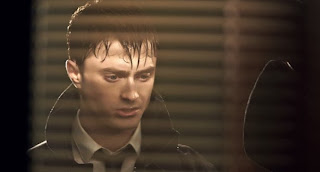 In other Daniel news, the Shortlist issue we already mentioned he was the cover star of has had it's photoshoot and interview revealed. Some quotes are below while the pictures are in our gallery.

He’s one of the most upbeat actors we’ve encountered, and relishing the noirish cinematic brief of this shoot, the chance to create a character rather than simply do ‘Blue Steel’ in waistcoated tailoring. “Today wasn’t as horrible and pose-y as it can be on shoots,” he says, later. “I could just do my job, which is great.”

“There are lots of nods to film noir in Kill Your Darlings,” he ventures...“It’s got the body at the beginning of the movie,” he says, referencing the genre’s penchant for murder".

Radcliffe and DeHaan became firm friends on set after an unusual introduction. “On our first day, me and Dane got beauty treatments together. I got a perm and he got highlights,” recalling their foil-topped jaunt to an Upper West Side lady salon. The result was fittingly preposterous. “I looked like one of the scousers from Harry Enfield,” he deadpans.

On his rumoured girlfriend:


[he]" alludes to a rumoured romance with a female co-star...he’s planning a two week break to hang out in his New York apartment “I’m going to go to an NFL game for the first time, so I’m very excited about that. My girlfriend, is over there too.” He remains tight-lipped on her identity, but jokes that he has “f*cking sh*tloads of romance” in store for her.

His favourite construct from Howl sums up the hedonistic energy of Kill Your Darlings perfectly. “There’s a line about how they ‘purgatoried their torsos night after night.’ That’s real confidence as a writer – taking a noun and turning it into a verb.” Radcliffe injects that same confidence into his Allen .


Also on the Shortlist website, Daniel divulged his favourite movie soundtracks. Watch below. 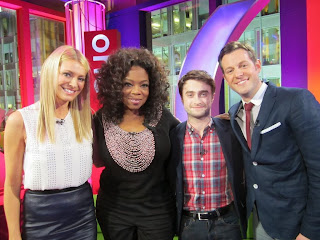 Finally, Dan appeared on The One Show to promote the film and right is one image of him with the hosts and other guest Oprah. UK readers can view the interview on the BBC player now. I am currently looking for an international viewing method.

However there is a short clip from the show below:

He was also interviewed by the Seattle Times and this can be read here.
Posted by Admin, Niamh, Danaholics Anonymous at 1:48 PM