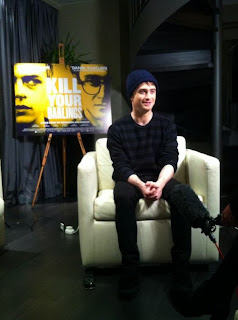 Daniel Radcliffe launched the Kill Your Darlings Cut Up Exhibition a little earlier this evening in London. We have a few images of Dan at the event in our galleries now, as well as the image left. We'll post more images, both of Dan and the art, as they emerge. If you "see the #KYDcutUp exhibition in London in the next 3 days, tweet [to @kydfilmUK ] the name of the location with #KYDcutUP 4 a chance to win preview tix!"

Also, as we've said previously, the second season of A Young Doctor's Notebook started tonight and Dan was to be seen promoting it and explaining his reasons for not using social media on Sky News today. The clip can be viewed here. In the interview he said that he couldnt expect privacy if he went "on Twitter and [told] everybody what [he was] doing moment to moment". There is some clips from the new series also included in the video.

UPDATED:
Some more images can be found in the gallery now that came from Getty and are very clear.
Furthermore, some of the interview with Sky News can be seen below: