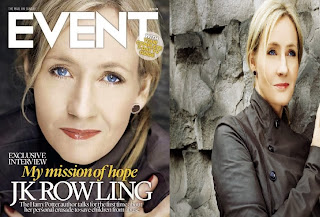 In last Sunday's Mail on Sunday magazine J.K. Rowling passionately opened up about horrific things she had seen in her work with her charity Lumos. The charity up until now has only worked in foreign countries and Rowling plans to bring it to Britain as well. As part of that promotion she has spoken about some of the less than satisfying experiences she has had in eastern european orphanages:

JK Rowling has revealed the heartbreaking moment she almost snatched a baby from her cot in a ‘cold and frightening’ state-run so-called orphanage in Eastern Europe.

The Harry Potter author says her maternal instincts drove her to consider the unthinkable during a visit to the institution, which she claimed was more like a prison than a home.

She says: ‘I’m an emotional person. I struggle with that a lot in this kind of situation. There was one little baby, a girl, and I was standing at this cot and I just thought, “I will take her”.

‘It was irrational but that’s your human response. There was no earthly way I could take this baby home but that is your most powerful reaction. You think as a mother, “I will save this baby, this one baby”.’

She says: ‘The one incident that absolutely killed me was a little girl with physical disabilities who had been put into the institution and used to ask for her mother. The nurse would go outside and ring the girl and pretend to be her mother. Utterly heartbreaking.’

In other Rowling-related news, the second part of Sony Playstation's Potter game collection, Wonderbook: Book of Potions  will be out on November 12th next.


Finally, as we previously told you, the Harry Potter Exhibition will be moving to Edmonton, Canada soon. After roaring success in Japan this is a great chance for fans to see some of the props used in the Potter films. Special guests have just been announced for the opening of the new location (TELUS World of Science) on November  23 - James and Oliver Phelps. The twins will also host:

a sneak peek on Friday, November 22, the day before it officially opens. The sneak peek will also host a giveaway for fans, where 100 pairs of tickets will be given out to hang out with the Phelps twins on the 22nd at TELUS World of Science – Edmonton.

Tickets purchased before November 10, 2013 are eligible for a chance to attend an exclusive exhibition preview hosted by James and Oliver Phelps. More info can be found here.
Posted by Admin, Niamh, Danaholics Anonymous at 8:13 PM