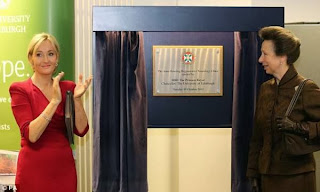 In J.K. Rowling news, she has been nominated for the Glenfiddich Spirit of Scotland award for writing. The nomination is for Robert Galbraith but we all know better! She has previously received this award as a Edinburgh resident for the 'Top Scot' prize in 2001. The results will be announced later this year.


Joanne Rowling was recently spotted opening a neurology clinic in honor of her mother Anne Rowling.  The facility is part of the University of Edinburgh and was partly funded by Rowling. A picture of the author with Princess Anne of the UK can be seen left. The clinic has been set up to help with diseases such as multiple sclerosis which Jo's mother Anne tragically died of before the publication of Harry Potter.


In other UK potter news, The Hogwarts Express is coming to the National Railway Museum! The train will be present from next Saturday the 26th October until November 3rd. More info is here.

Some more first looks at what Diagon Alley will look like in Universal Studios Orlando have emerged. The entrance to the magical street will replicate the Wyndham Theatre in London and some construction pics can be found on Snitchseeker here.  Some aerial shots of Gringotts cart ride and more can be viewed here.

Finally, there will be a documentary made about real-life Quidditch! E news are reporting that:

One team in particular, UCLA's quidditch team, is at the center of Sangari's doc, which follows the team to the 2011 Quidditch World Cup where they compete against 94 other teams from four nations.